For over 10 years, marine debris clean ups have been conducted around the North East Arnhem coastline by Dhimurru Aboriginal Corporation. Marine debris, also known as marine litter, is human created waste that has deliberately or accidentally become afloat in a lake, sea, ocean or waterway. Most of the rubbish arrives from via ocean currents from South East Asia.

Along with marine debris, ghost nets are also an issue for the coastal communities around the Gulf of Carpentaria. Ghost nets are fishing nets that have been abandoned at sea, lost accidentally, or deliberately discarded. They travel the oceans of the world with the currents and tides, continually fishing as they progress through the waters. As they are unattended and roaming they fish indiscriminately, not only catching undersized and protected fish but also threatened species including turtles, some species of which are critically endangered.

Alongside this project, Dhimurru also works with World Expeditions to tackle a larger area of coastal land. The area chosen is based on the area of highest impact which has seen the longest period between cleanups. This project gives people from non-indigenous backgrounds the opportunity to spend time with traditional owners, walking with them, hunting with them and learning culture on the ground. Dhimurru benifits with the introduction of extra pairs of hands to assist in the arduous task of clearing the beaches of rubbish. Last year (2011) the project cleared 1,700kg of rubbish in three days from a 3.7km stretch of extremely remote coastline. A very worthwhile and satisfying outcome.

If people wish to assist with the net clean-up and recording, please register your interest with World Expeditions or Conservation Volunteers Australia via their websites (see links below). All help is greatly valued in an attempt to reduce this problem.

[It is important that the 'data' (debris) is left in the area until this time so that accurate comparisons with previous years can be made to demonstrate what we believe may be an increase. Dhimurru asks that rubbish not be removed from the Cape Arnhem area for this reason. It is, however, very worthwhile to pull any Ghost Nets above the high tide mark so that they cannot be washed back into the sea and the Dhimurru Rangers can collect them later. It is hoped that a depot near the start of the beach drive will eventually be established so that people who would like to clean up the Cape can deposit rubbish found on the beach without affecting the survey. This would only be for marine debris and we ask that permit holders respect this and continue to take their own rubbish out with them. Dhimurru welcomes assistance from permit holders visiting any other recreation area to clean up anything they can. We would like to hear how much has been removed from any area to add to our data.] 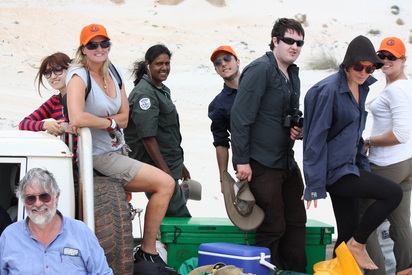 "Join us for a remote journey to Northeast Arnhem Land, assisting the Dhimurru Aboriginal Corporation with marine rescue projects.

Cape Arnhem is located at the tip of the Northern Territory, forming part of the spectacular North East Arnhem Land wilderness area.  This land is one of the last great unspoiled areas of the world and well known for its strong Aboriginal culture, towering escarpments, spectacular coastlines, wetlands and wildlife. The peninsula's wild coastlines and surrounding waters swarm with marine life and face continual threats from marine debris pollution.

Working with the Dhimurru Rangers, participants will walk beaches along Cape Arnhem to collect, catalogue and dispose of marine debris."