Dhimurru also relies on volunteers in assisting with large jobs, as well as specialised projects where specific expertise are required.

Over the past few years volunteers have played an integral part in the construction of toilets at Designated Recreation Areas and have been incredibly important in beach clean ups. Dhimurru greatly appreciates all the efforts volunteers have put in to helping us achieve our vision.

Volunteering is a very rewarding experince for the volunteer, the organisation involved and the community as a whole, and in Dhimuru's case (and perhaps most importantly) the environment.

If you would like to volunteer with Dhimurru Aboriginal Corporation please complete and submit the volunteer request form .volunteer_application_form_2019.pdf 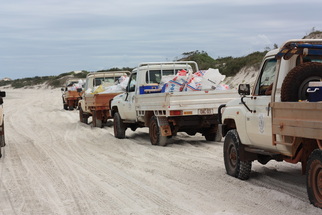 A major project that Dhimurru facilitates every year is the Conservation Volunteers Australia Wanuwuy (Cape Arnhem) Marine Debris Survey. The project is conducted each year in August/September, is pre-arranged and offers a more structured experience for volunteers.

GhostNets and marine debris are removed and sorted, and any marine life caught in the ghost nets is released back into the ocean.

The project gives people from non-indigenous backgrounds the opportunity to spend time with traditional owners on country; talking, walking and hunting with them and learning about Yolngu culture. The outcomes are very worthwhile and satisfying for all involved.


Marine debris, also known as marine litter, is human created waste that has deliberately or accidentally become afloat in a lake, sea, ocean or waterway. Most of the rubbish arrives from via ocean currents from South East Asia.

Along with marine debris, ghost nets are also an issue for the coastal communities around the Gulf of Carpentaria. Ghost nets are fishing nets that have been abandoned at sea, lost accidentally, or deliberately discarded.

They travel the oceans of the world with the currents and tides, continually fishing as they progress through the waters.


As they are unattended and roaming they fish indiscriminately, not only catching undersized and protected fish but also threatened species including turtles, some species of which are critically endangered.

Alongside this project, Dhimurru also works with World Expeditions to tackle a larger area of coastal land. The area chosen is based on the area of highest impact which has seen the longest period between cleanups. This project gives people from non-indigenous backgrounds the opportunity to spend time with traditional owners, walking with them, hunting with them and learning culture on the ground. Dhimurru benifits with the introduction of extra pairs of hands to assist in the arduous task of clearing the beaches of rubbish.

If people wish to assist with the net clean-up and recording, please register your interest with World Expeditions or Conservation Volunteers Australia. All help is greatly valued in an attempt to reduce this problem.