All Yolngu people in north eastern Arnhem Land belong to one of two basic divisions, or moieties, called Dhuwa and Yirritja. Children belong to the same moiety as their father; their mother belongs to the other moiety.

Everything in the Yolngu universe – Spirit Beings, plant and animal species, clan groups, areas of land and water are either Dhuwa or Yirritja. The Djang'kawu Sisters, the morning star, the water goanna, the stringybark tree, and the land in and around Yirrkala are Dhuwa, while such things as the evening star, stingray, cycad palm, and members of the Mangalili clan are all Yirritja.

Within each moiety, people belong to smaller groups called clans, each having its own language. Children belong to their father’s clan (and moiety), while their mother belongs to another clan (of the other moiety). In the Gove Penninsula and the surrounding area, most Yolngu belong to one of sixteen clans, of which eight are Dhuwa and eight are Yirritja.

Clan members own areas of land and waters in common. The relationship is, however, much more complex than just ‘owning’, or even ‘caring for’, the land. Yolngu often say that they ‘come from’ the land, or that they ‘are the land’ – a difficult concept for non-Aboriginal people to grasp. How can it be explained?

The land and waters of each clan were bestowed on the forebears of living clan members long ago in Wangarr Time, which Yolngu may refer to in English as ‘Creation Time’; or sometimes they just say long ago. Some follow the common Australian English practice of using the terms ‘Dreamtime’ or ‘Dreaming’.

The Wangarr beings hunted animals, gathered a variety of vegetable foods, held ceremonies and generally behaved in the same way as Yolngu people did at the time of the establishment of a mission at Yirrkala in 1935. There were important differences, however. 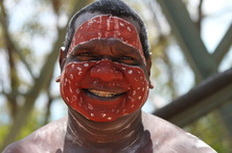 They passed on, too, to the founding members of each clan their language, law, paintings, songs, dances, ceremonies and creation stories, all emanating from the Wangarr presence and activities in clan land and waters. Together, the land and waters and this sacred clan property, both tangible and intangible, form a clan member’s djalkiri, his or her ‘foundation’, as Yolngu translate this important concept.

The Yolngu word for land (or place or camp) is ngirrima. In everyday speech, djalkiri may be used in its literal sense of ‘foot’ or ‘footprint’.

Yolngu individuals belong as much to the djalkiri as it does to them. Spiritually they are part of it. Within every clan’s land and waters there are one or more areas where ‘spirit children’, formed of the Wangarr essence, await their time to be born into the world of the living. When that time comes, a ‘spirit child’ enters its mother’s womb to animate the foetus.

Yolngu relationship to the land and waters does not end here, however. Just as individuals can think of themselves as being a totemic species or say that they are the land, so too can their nandi (mothers), and mari (grandmothers), and other kin.

An individual, therefore, calls his or her mother’s Wangarr species nandi and refers to her country as nandi wanga; in the case of a grandmother’s Wangarr and wanga the kin term mari is used, and so on. The extreme importance of the widespread network of kinship in Yolngu society means that most people would know their relationship to a wide number of places in terms of their relationship to the people who own them.
This is an excerpt from Dhimurru's Visitor Guide. This section, slightly amended, is taken from: ‘Djalkiri Wanga; the Land is My Foundation; 50 Years of Aboriginal Art from Yirrkala, Northeast Arnhem Land’, by Gillian Hutcherson, (Berndt Museum of Anthropology Occasional Paper No. 4), The University of Western Australia, 1995, with permission from and thanks to the author.