Dhimurru is an incorporated Aboriginal organisation established by Yolŋu land-owners in Northeast Arnhem Land, Australia. The office is located in Nhulunbuy (Gove).

Yolŋu (Aboriginal people of Northeast Arnhem Land) are the traditional owners of lands consisting of approximately 550,000ha. The Aboriginal Land Rights (Northern Territory) Act of 1976 recognises Yolŋu as the owners of this land under Australian law. Dhimurru has jurisdiction over approximately 8,500km2 of this land.

Since time immemorial Yolŋu have managed the natural and cultural resources and have achieved a balance that ensured long term, sustainable resource use for the economic and social well-being of the landowners.

The permanent presence of a large non-Yolŋu population in recent times required a new response. On April 8, 1992, after extensive consultations Dhimurru Land Management Aboriginal Corporation was formally incorporated under the Aboriginal Councils and Associations Act 1976.

Dhimurru seeks to provide residents and visitors with an enjoyable recreation experience and at the same time an avenue for enhancing their awareness of Yolŋu cultural values.

In initiating Dhimurru, traditional Yolŋu landowners recognised the urgent need for planned, sustainable and culturally appropriate management of the recreation areas as the township of Nhulunbuy developed and visitor numbers increased. They strongly asserted that access to their land would in the future be contingent upon such management.

A fundamental objective of the organisation is to investigate avenues for incorporating western science-based management practice within traditional resource management. Dhimurru believes that the result can be beneficial in maintaining both the environmental and cultural integrity of Yolŋu lands and seas. With this aim in mind, Dhimurru has established a co-operative working relationship in collaborative research and survey projects with a range of agencies and institutions. 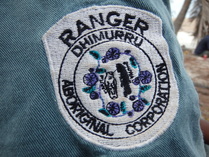 The badge is a strong representation of Yolŋu culture and the way Dhimurru operates. It shows the black and white cockatoos found in this area, enclosed in the vine, Mawuka (Morning Glory).

The white and black cockatoos represent the moieties that are one of the most important aspects of Yolŋu culture. Moities, Dhuwa and Yirritja, are the fundamental divisions that separate everything in the Yolŋu universe.

In this case, Mawuka also symbolises life, power, beauty and the connections between the two moieties despite the distinctions between them. Dhimurru emulates this cross-cultural and cross-clan relationship idea and extends this in its “both ways” approach bringing Ngapaki and Yolŋu knowledge together in managing country.