Dhimurru constructed these walking trails on Yolŋu land where you will see land and sea belonging to several clans.

Elders have provided interpretative material to assist visitors in understanding the richness and beauty of the Yolŋu environment. They want visitors to their country to enjoy it through understanding it. Many ancient walking trails traverse the area, both inland and along the beaches, and while this Walking Trail is not an ancient one it has been planned so that a variety of resources and their uses can be appreciated. 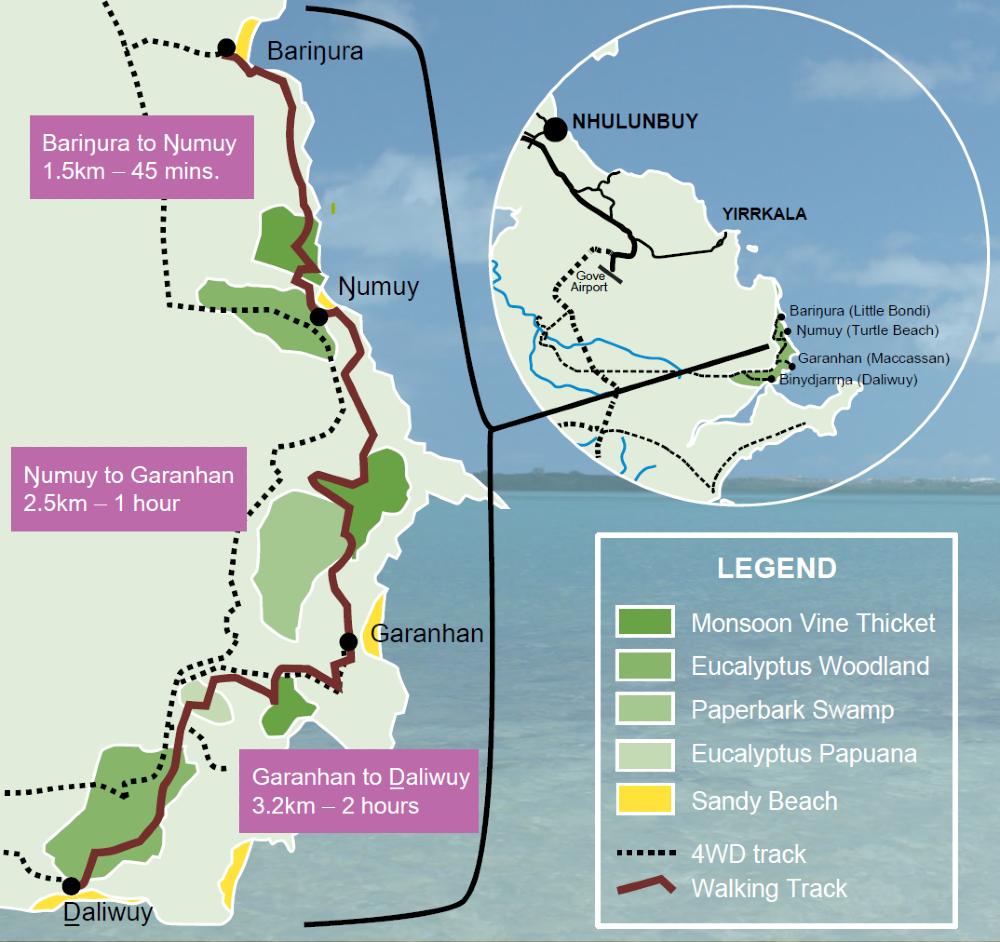 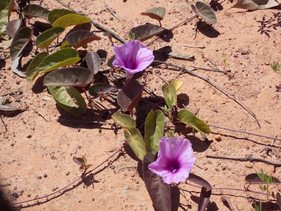 The trail begins at a ‘corner’ of Binydjarrnga named Djadaymunbuy and ascends from the fine white sand beach into a hilly area with scattered rocks called dhumurr. This is eucalypt open woodland with Gadayka (Eucalyptus tetrodonta, stringybark) and Gungurru (Eucalyptus miniata, woolybutt) dominant.

Among the understorey plants are Dhalpi (Livistonia enermis, five fingered sand palm) and many other trees, bushes, and vines that Yolŋu use for food, medicine and the manufacture of domestic containers and ritual objects.

The trail crosses a private road to a residence located in the area named Galkila. To the right of the trail is an area named Bandalal, a retja (monsoon vine thicket or jungle).

The track meets the road leading to Garanhan and passes a fenced area containing the ‘Macassan stone pictures’. The trail leads to the beach area at Garanhan where there are shade trees, Mawurraki (Casuarina equisetifolia, casaurina). 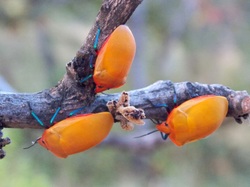 The trail leads from the beach in a northerly direction inland, initially up a rather steep dune. On both sides of the trail numerous patches of large trees including Larrani (Syzygium suborbiculare, red bush apple), Ganyawu (Semecarpus australiensis, native cashew), Gunga (Pandanus spiralis, pandanus) and smaller vegetation.

The trail follows the edge of a paperbark swamp, which is a lagoon during the wet season when food plants such as Wakwak (Nymphaea macrosperma, water lillies) and Rakay (Eleocharis dulcis, water chestnuts) are collected.

North of the paperbark swamp and inland from the coastal dune may be seen areas of monsoonal rainforest that are rich sources of Ganguri (Dioscorea transversa), a favourite yam. Past this area is a band of low forest on undulating land that merges into mid-high to tall open woodland.

The trail leaves the forest and follows the edge of the bauxite headland with views south-east to Ḏaliwuy, and north to Bariŋura. Following the coast the trail then descends the rock face through a patch of rainforest to the camping area near the beach. 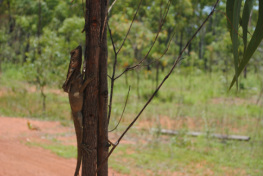 The trail ascends from the beach through an area of dense monsoon vine thicket where many trees and plants not seen elsewhere occur.

Bird life is also abundant here, and a number of small animals may be seen at dawn or dusk. The trail then leads into a sparsely treed open forest and onto an extensive laterite shelf with open views eastward to the Gulf of Carpenteria.

Isolated sandstone boulders are scattered across the shelf where grey termite mounds may also be seen. The vegetation pattern characteristic of such exposed sites along this stretch of coast is attributed to the strong south-east trade winds that blow across the Gulf during the dry season.

The trail leads through a stand of Mawurraki (Casuarina equisetifolia, casaurina), and then descends to a relatively sheltered white sand beach at Bariŋura, with rolling sand dunes bordered by a rocky ridge covered with coastal vine thicket. At the base of the ridge are large scattered rocks that form numerous rockpools, some with abundant oyster colonies.