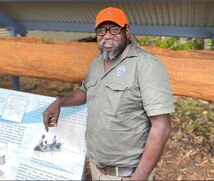 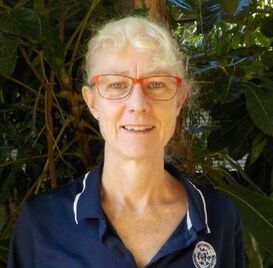 Christine commenced work with Dhimurru as Executive Officer in February 2018.  Christine has a range of skills developed as a result of many years working in various positions overseas and in Australia. She has worked primarily in regional and remote areas.

Before joining Dhimurru, Christine worked as an Australian Volunteer in Timor Leste as an Organisational Mentor for about two and a half years. Prior to leaving Australia she was the Park Manager at Uluru-Kata Tjuta National Park in Central Australia for five years. As Park Manager of a jointly managed park, she worked closely with the Board to implement strategic directions as determined by the Board and over saw day to day operations of the Park.

Christine has worked in both state and federal government, including in the Queensland Government where she was the Regional Manager, Cultural Heritage in the Environmental Protection Agency before moving across to Queensland Parks and Wildlife Service, as District Manager of Longreach District.

Whilst employed by the Australian Government Christine worked with Australia’s aid agency formerly known as AusAid before moving across to the Caring for our Country program in the Community Capacity Building Team working with the regionally based Facilitator Network. 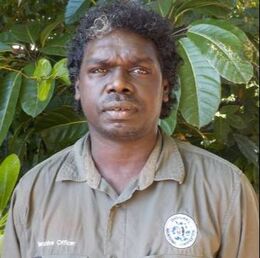 Rrawun Maymuru is a proud Mangalili man with his homeland at Djarrakpi. He joined Dhimurru as a ranger in 2018 and took on the role of Senior Cultural Advisor in early 2019, following in the footsteps of Djalinda Yunupiŋu.

In the early 1990s Rrawun did work experience with Dhimurru, while a student at Yirrkala School. Impressed by the vision Dhimurru had for the future he knew that one day he would return to work there.

Always interested in his culture and the land, Rrawun has been greatly influenced by his grandfather, Roy Marika. Inspired by his grandfather, Rrawun has become a teacher, cultural advisor and leader of his clan. He has a great love and knowledge for the land on which he walks and understands the importance of sharing this with the next generation.

Rrawun brings a wealth of cultural knowledge and experience to his new position and is committed to sustaining both-ways learning—and both-ways working—in Dhimurru. He recently participated in his first Learning on Country (LoC) galtha rom. He enjoyed the opportunity to pass on his cultural knowledge to the students of Yirrkala school. Rrawun is looking forward to working with the Learning on Country program.

Rrawun previously worked for Laynhapuy Homelands as a training officer and with MEP as a coordinator. With his cultural knowledge and love of the land he has been employed with Lirrwi Tourism and is also a tour operator and cultural advisor with Bawaka Cultural Experiences, a family venture.
​
A talented musician, Rrawun is lead singer and songwriter with world-renowned band East Journey. This talent has given him the opportunity to travel to many communities, towns and cities around Australia and overseas including to Vanuatu in the South Pacific and Los Angeles—a very different lifestyle when compared to living in Yirrkala. 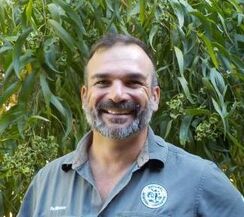 Ten years ago before coming to Dhimurru, Paul was with the Queensland Parks and Wildlife Service for three years, the most recent time of which he was stationed in the Bunya Mountains. He has a Bachelor of Applied Science degree specialised in Protected Area Management, but had never applied that to Indigenous Protected Areas, until beginning his employment with Dhimurru.

Paul has many roles within Dhimurru, but his main role is to mentor and support the Dhimurru rangers, to achieve their aspirations in natural and cultural resource management. He also implements projects that reduce visitor impacts on the Dhimurru designated recreation areas, access track management, fleet management, crocodile management and Workplace Health and Safety to name a few.
Paul has been culturally adopted into the Rirratjingu Clan and his skin name is Wamut.
‘’After all this time living and working in East Arnhem Land I am still amazed at how strong and resilient Yolngu people are. I am very grateful and privileged to be a part of supporting rangers and Traditional Owners to protect their land and sea, as laid down by past elders in the form of the Dhimurru  vision statement. My Yolngu family teach me valuable cultural life lessons every day, that I share with my ngapaki family and friends all the time when out on country.” 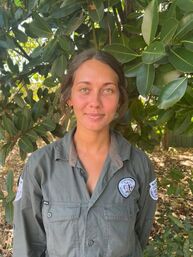 Jessica commenced the role of Sea Country Facilitator at Dhimurru in September 2021 through a secondment role from NT Parks and Wildlife Commission. Before joining Dhimurru, Jessica worked as a ranger predominately focusing on land management and previously held a women’s team leader role working with Indigenous rangers on Land and Sea Country in Darwin. She is currently studying a Bachelor of Environmental Science with Charles Darwin University, completing a double major in biodiversity and conservation and eco-cultural resource management.

Jessica’s main role at Dhimurru is to provide guidance to rangers to develop and accomplish visions for future management of their Sea Country. This involves working on several marine debris and ghost net management activities, sea grass monitoring and mapping, sea temperature monitoring, tern surveys, sea patrols and cultural zoning/mapping of Sea Country. Jessica feels extremely privileged to be a part of the Dhimurru team and values the transfer of Yolngu knowledge from rangers each day whilst out on Land and Sea Country. 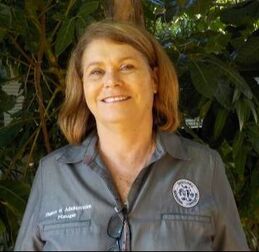 Maureen is Dhimurru’s Business Services Manager and commenced work with Dhimurru in December, 2015.  She has long history in East Arnhem, arriving in January 1973.  Aside from attending school with some of our Elders of today, she was a business owner in Nhulunbuy for many years.  Following this period, she completed her Bachelor of Business (Accounting) and now manages the finances of Dhimurru.

“I have a long-term commitment to East Arnhem Land and feel very privileged to have been able to serve the Yolngu people.  This region is rich in culture and beauty.  Dhimurru is a wonderful place to work and for that I thank the Yolngu people,” 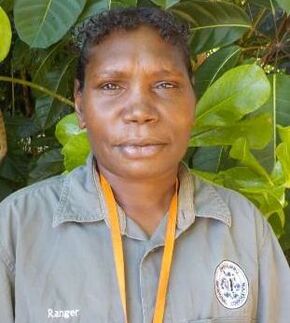 ​‘My dream djama (work)’—that is  Waŋgawuy’s description of her position as Ranger with Dhimurru. Dhimurru is like family to Waŋgawuy. Her grandfather was one of the founders of and her father was a director on the board.

Waŋgawuy started with Dhimurru in 2009 working with Lisa Roeger, Wendy and Daylulu Marika. After four years she took a career change and worked with Anglicare as a disability carer, however it became clear that Dhimurru was where she really belonged and in 2017 she returned, taking on the role of Ranger. She said, ‘it’s where I want to be and I enjoy coming to work every day’.

Waŋgawuy’s passion for the work is evident in her reliability and consistent attendance and in 2018 she was awarded the inaugural Dhimurru Annual Attendance Award. She also won the monthly staff award in both August 2018 and January 2019. These awards recognised  Waŋgawuy as a steady, reliable, hard worker who is always willing to take on any challenge asked of her.  Waŋgawuy displayed leadership qualities on the ranger exchange to Crocodile Islands and is very supportive of her fellow rangers in their tasks.

She also enjoys the learning and sharing of knowledge offered by the Learning on Country program, especially with children. Her own education is important and in May, Waŋgawuy graduated with a Certificate II in Conservation and Land Management at a ceremony held at Yirrkala.
​​
Away from Dhimurru Waŋgawuy is a mother and grandmother who enjoys spending time with her family. She enjoys playing with her grandchildren, visiting her homeland at Garrthalala to camp and hunt with her family. ​ 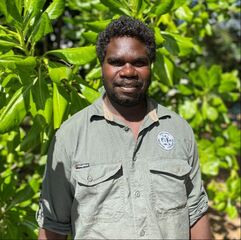 Micah started his Dhimurru journey as a work experience participant from YBE at the end of 2020. Then sucessfully became apart of the Dhimurru team at the beginning of 2021. When he started, he joined us as a ranger getting employee of the month for April. Micah has great dedication and eadership skills and has worked his way upto our Dirramu(male) Senior Ranger.

Micah has completed is Chemical training, 4WD training, small motors and First Aid amongst many other things. He also had the opportunity to travel to Darwin for a Learning on Country meeting as a proxy for out Seinor Cultural Advisor particitpating in the Annual Steering Committee across all sites. He thoroughly enjoyed this experience and oppotunity to be part a part of the leadership group.

Micah enjoys doing weekly maintence runs to the coastal and inland Dhimurru Recreation areas & keeping them tidy, helping maintain the vehicles and patrolling. Outside of djama he enjoys hunting and camping. 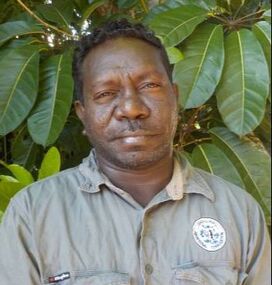 Wulwat is a local Yolngu man and belongs to the Rirratjingu clan with his homelands located south of Nhulunbuy, along the coast at Gulurunga (Port Bradshaw). Before Wulwat started with Dhimurru in late 2013, he worked at Nuwul Nursery at Yirrkala, planting and landscaping, as well as teaching students about native plants. Preserving, maintaining, and looking after country is the main aim for Wulwat’s role as a Ranger at Dhimurru. This he achieves through a variety of recreational area maintenance djama (jobs), with a special preference for the sea country djama, such as marine debris, ghost net recovery, and monitoring sea life like dolphins and turtles.

“Cleaning up the environment is important for the future, for my kids”.

Wulwat enjoys the training opportunities available to him at Dhimurru and values the support and encouragement in furthering his education and skills. He is currently working towards his Certificate II in Conversation Land Management. Once that is complete, his goal is to obtain his Certificate III and would also like to gain skills in welding, and work towards his skid steer and forklift licences. Dhimurru means “family” to Wulwat - he is hoping to follow in the footsteps of his father, the current Managing Director, and to pass on his knowledge to the next generation, who already enjoy working with him on their school holidays. Wulwat’s vision for the future is to stay at Dhimurru long-term, and work his way up to Senior Ranger next.

Hamish belongs to the Golumala clan and grew up on his country at Barrkia, north of Melville Bay. He started with Dhimurru in mid 2014. Prior to this, Hamish was a Ranger with Yirralka working out on the Layhapuy homelands. Hamish’s position as a Ranger at Dhimurru involves a wide range of tasks, including permit checks, general recreation area maintenance, vegetation rehabilitation djama, and marine debris clean-ups.

Hamish values his role at Dhimurru as it allows him to gain knowledge from his elders and a better understanding on how to care for both land and sea.

“It’s exciting work, being on country and learning everyday”.

Hamish aspires to be a strong role model in his community and sees the importance in the work that Dhimurru does in planning for the future, making sure that “this land is here for generations to come”. 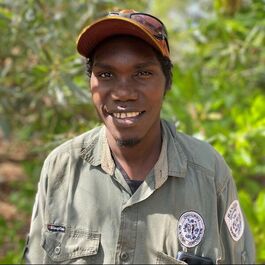 Boaz started work experience with Dhimurru towards the end of 2020 and secured a full-time ranger position at the beginning of 2021.

Boaz enjoys patrolling with the rangers and working on country, he also has a great work ethic and got awarded employee of the month for FEB.
​
Since being employed with Dhimurru he has gained his small motors training, Chemical Training and First Aid Certificate. 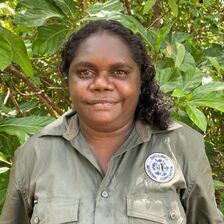 Hello my name is Marsha Burarrwanga but I like to be called by my Yolŋu  yaku Nuwaniny.
Before starting at Dhimurru I was a part of the APLA program.  At ALPA we would did programs such as painting and jewellery making.

I’m happy to be employed by Dhimurru as a miyalk ranger. I really enjoy working out on country and learning new skills such as fencing.

Outside of work I enjoy hunting, fishing  and spending time with family. 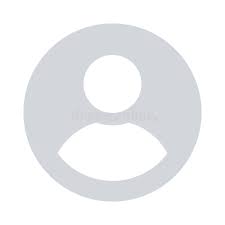